MEMPHIS, Tenn.—Aug. 5, 2015 (James Street Media Services)—One of the largest cargo airplanes in the world was deployed by Mallory Alexander International Logistics to expedite a client’s shipment of compressed gas containers to Ukraine in early July.

Upon receiving a request from Nova Gas, Mallory Alexander immediately secured an Antonov AN-124 to handle the special needs of this oversized cargo. Originally developed as a Russian military transport aircraft, the Antonov AN-124 is the biggest serial heavy lifter in the world.1 Due to the size of the two gas tanks, it was crucial to have this aircraft’s payload capacity, range, and internal crane. 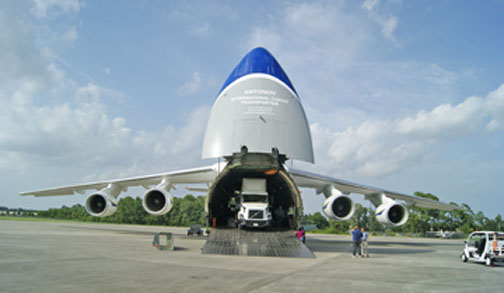 Mallory Alexander arranged all of the specialized transportation needs for this time-critical project in less than two weeks. This included all domestic transportation, loading and strapping in the AN-124, clearing the containers through foreign customs, and ground transportation from the airport to the final destination.
“Nova Gas is a major supplier of gas mixtures to semiconductor manufacturers. Due to an increase in demand, it was necessary to use extraordinary means to ensure that our supply chain was not interrupted,” said Nova Gas CEO Ted Soderlund. “Mallory was able to move our empty containers in a timely manner to make sure our customers would receive the product on time.”
Although the job required specialized aircraft not used every day, Mallory Alexander officials said they were prepared.
“Mallory has a long history of handling cargo such as this—oversized and needing special aircraft to accommodate both the size and time constraints of the shipment,” said Mallory Alexander COO Tina Newman. “We were very pleased to partner with Antonov to flawlessly execute this unique project for Nova Gas.”
(Click here to see more photos)

About Nova Gas Technologies
Nova Gas Technologies, Inc., founded in 1964, is a leading international manufacturer of gas mixtures used in excimer lasers. The semiconductor industry uses excimer lasers in the lithography process for making computer chips. Similar lasers are used in vision correction surgery and in industrial applications that include diamond marking and micro machining. Nova Gas is based in Charleston, South Carolina and has stocking and distribution partners around the world.